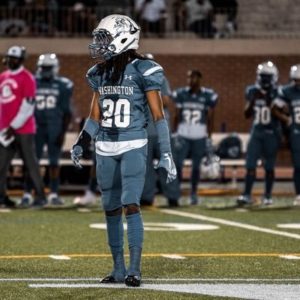 West’s core GPA ranks him at the top of his HS and he has a ton in terms of extracurriculars at his HS. He’s a well-spoken, very intelligent student-athlete that seems to put himself in the right spot on the field. West reads the play quickly, and his 6′ frame covers a good bit of ground. West takes advantage of his situations. His opportunistic approach to the game creates a lot of turnovers for his team. He does a nice job of getting off blocks. Right now, he’s a bit positionless as a DB. He has the frame of a CB, and I like his length at that position too, but would like to see a bit more lateral quickness as well. Right now, will project him as a FS, now way he can play SS with his current frame. West is a solid tackler, he wraps up at the waist and shows good physicality bringing down the ball carrier. Drops head on some tackles, needs go cheek to cheek with his attempts to avoid concussions.