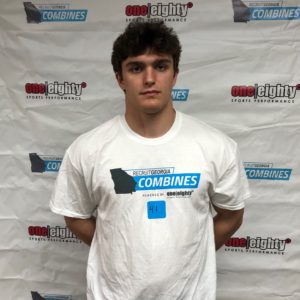 Great teammate and a hard worker on the field and in the classroom.

Parker was the primary back in Marist triple attack. Right at the mesh the you see a few good qualities in an option FB. His forward pad lean and low pad level just leaps out on film, and you see his feet churn thru tacklers to extra yardage. His 500 lbs squat for a class of 2021 athlete is extremely impressive. He’s definitely a physical player, and shows really impressive determination breaking through defenders to get the extra yardage. Very good agility too, Parker can change direction really well. For that reason, I would like to see him get some reps at linebacker this year, which seems likely with so many seniors on defense graduating. Parker was one of the top athletes in our Cobb Combine in early February where his agility and strength numbers were near the tops for players in the class of 2021. Really encouraged by Parker, starting as a sophomore is no easy task, and to do it on one of the best teams in 4-A says a lot about his athletic potential. Parker made it back to another combine before the season, he has added a little more weight, improved on his broad jump reaching the 9′ marker and increased his bench reps a good bit too. Considering his progression, and skill set; I would imagine a lot of option schools will be interested in Parker.