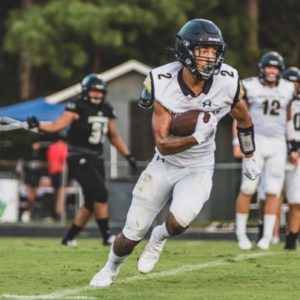 Since playing football from the age of 6, I’ve received several “hardest worker” and leadership awards, along with being very coachable. I am equally focused in the classroom as I am on the field.

Brand has good quickness and change of direction on film. He played a good bit of receiver where he showed nice athleticism. Good body control going up and catching the football. He put himself down as a cornerback on our form, but senior year he is still at receiver, and honestly that just looks like a better fit. Receiver is a much better proposition at the next level. He is pretty good at changing directions, been working like crazy this offseason on his top end speed. He’s doubled his production already with a few games left in the season, and should be around 700 or so yards on the season with over 60 catches. It’s hard to argue the production in tandem with his ball skills, and think programs will be intrigued in the Brand down the stretch.