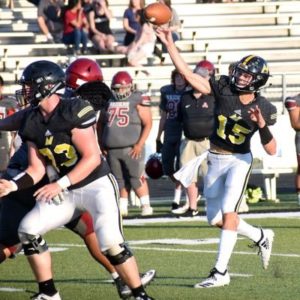 North Murray WR has played pretty well his junior year making several long KR/PR for a TD. He’s a pretty elusive runner and can change direction extremely well. In some points, McConkey just turns the defender completely around, which bodes well for his route running potential. He’s got outstanding hands, made one catch going full extension over the middle while getting nailed. He’s just a nice slot receiver target, he makes the right cuts after the catch. Improving his quickness even more while continuing to improve on his weight will be a difference for the 2020 recruit. McConkey also plays DB where his quickness make him look solid in coverage. Ran a 10.8 100m this offseason, really great speed for the 2020 recruit if he can fillout his frame. Also a good basketball player. Heading into his senior year he is slotted to play QB and has gotten a lot of looks from FBS programs after his outstanding performances at camps/combines.