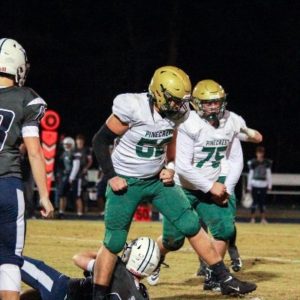 My ability to read plays quickly, shed blocks, and play aggressively. Also my ability to outwork everyone off the field. Very coachable. 95 tackles and 1st team all-region.

Kiernan finished off his HS career with an All-State honorable mention selection after totaling 108 tackles and 15 for a loss in just 8 games. His 13.5 tackles per game ranks him near the tops in all of Class in fact. He’s add about 15-25 lbs though and closer to 215 lbs. now, which is remarkable how quickly he has amassed weight over the last year. The high football IQ linebacker always seems to have a beat on the football play, and what I like the most is effort level. Kiernan just goes 100% on each play – putting his body on the line to make the stop. Kiernan has improved each year in the weight room. Open field tackling is his best skill, and with more strength his efficiency at getting the ball carrier should only improve. Kiernan reads the play and explodes through his tackles right at the numbers of the ball carrier. He does a very good job of reading the offensive player from a distance and gets low on his tackle attempts. Senior year Kiernan showed more progress in pass coverage getting out to the flat and making tough tackles. The added weight has helped with his efficiency on his tackles and even doing a better job of getting off blocks. The 2020 recruit is a tough player who has always mixed up in side and the added muscle has really helped his productivity. Going to the next level he shows the flexibility to play MIKE but also his improved quickness suggest that some WILL could be in play too.