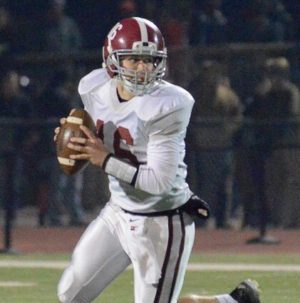 McLaren has led Northgate squad to almost 30 wins over the course of his HS career. He does a great job of managing their balanced offense, being sure to spread the ball around to his teammates. He makes some nice throws around the sidelines and he does good job of leading the receiver. He was made to play under center, has trained with all-time great under center QB in Joe Hamilton and you see glimpses of him while he throws the ball in the pocket. Class of 18 athlete carries out his fakes excellently and keeps a cool demeanor when standing in the pocket. When the pressure is on McLaren steps his game up and made some clutch plays at the end of games the last few years for his team. Senior year he has 3 come from behind victories, including a major upset over #7 ranked Langston Hughes where he led his team to 14 points in the 4th quarter in pivotal win to keep playoff hopes alive. Senior is cool as they come under pressure and will stand tall making the big throws. He is a money player, and we have seen him make a lot of game-winning throws. This season he is running the football more than ever, his shuttle has dropped .4 since he first signed up too. Great student-athlete and leader. First Team All County, All-Region Honorable Mention.