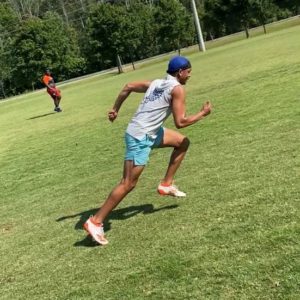 Wallace has instincts for the game, and though weight under 170 as a sophomore, he played big and made good open field tackles, including against one of the top RB’s in the country in Gibbs. Wallace is now up to 175, and that should have a huge difference in his already reliable tackling. Wallace gets downhill against the run. He has good acceleration, but also just seems to see the play well. Setting up his tackles could be better. Very aggressive football player, I can see why South Cobb blitzed him off the edge a lot. Wallace gets pretty low on his tackle attempts, but could definitely work on dropping his hips and trying to drive his legs. He definitely has a nose for stopping the run, now for his junior year we really want to see him take a jump in pass coverage. He has the frame to be a FS at the next level. Love his motor, Wallace is the type of player who works his tail off, and we can see him taking another good jump here in 2020.