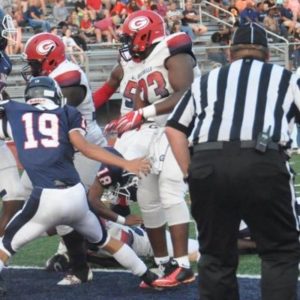 I can play almost everything on the field and I love the game.

Brooks was a linebacker prospect a year ago, but wow, the 2020 recruit has ballooned. I was pretty high on him, but there is some major deterrents as well. I would guess that Brooks gained almost 30-40 lbs from this time a year ago. His 84 tackles and 8 sacks last year was pretty awesome. He’s a very good athlete, someone that has always stood out, so watching him do so well last year is not a complete surprise. I’ll say tho, his HS gets blown out fast, and these could potentially be empty stats. I’ve watched complete games of Greenville, its almost staggering the lack of hustle going on in the game. It doesn’t really seems like a football game. Brooks does try, and you can find that on film with him busting his but out to the sideline. He’ll have to play DT at the next level. Lower body is huge. Big time hitter, but doesn’t always show the best form mostly relying on blowing the ball carrier up with his size. Brooks is a raw athlete, he even gets some reps at FB where his first step is pretty impressive.