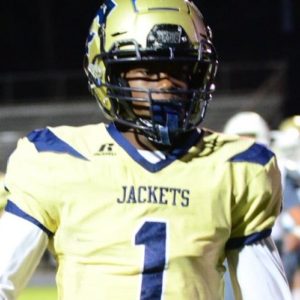 Guyton had an impressive junior year throwing for 1700 and rushing for 400. This is a new Thomas Co. Central, they are in the gun and throwing the football, and Guyton seems to be finding his confidence in this newer framework. He has a pretty quick release, and could be even quicker if he tightens up. that stands out right away. Throws a fairly nice spiral but what I like the most with Guyton is his ability to lead the receiver. Makes some tough reads when flushed out and keeps his eyes up field. Guyton is a solid quarterback, he knows to stretch plays out and let his receivers do work to get open. He doesn’t seem to force the issue too much. Shows nice agility in the tackle box, pretty deceptive reading the defender and faking them out. He was we like to call a subtle juker, making quick cuts that throw defenders off enough. Would like to see him show more urgency after he fakes out a defender, he is agile enough but want to see him really get up field fast. Guyton has good weight to him. He breaks arm tackles and is pretty tough fighting for yards. If he breaks off more runs this year, I can see option schools really taking an interest.