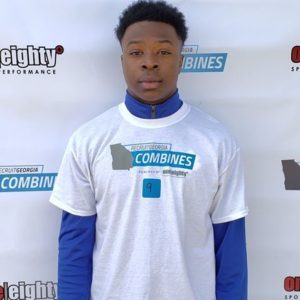 Meyers has been tested at our combines, and his 34″ vertical jump definitely stands out, but also a 9’9″ broad jump to boot – for a 2021 recruit, this indicates that his functional athleticism should lead to a big junior year at WW. There is no doubt they have the fire-power with Donovan Anthony making it back at QB, where he is surely going to throw for 2000 yards, and I think Meyers is going to land a good bit of those yards too. Meyers has elite quickness too, his shuttle time is at a laser timed 4.09 and his ability to change direction in the open field is going to really blow away Class A defenses this year. In his sophomore film he shows signs of flashes of his elite athleticism where he perfectly high points a football. He’s only 5’10”, but his leaping ability really allows him to play at a number of receiver positions. Meyers has gained good weight and muscle this offseason. He has a ton of talent considering his athleticism, and should be a no doubt FBS recruit honestly. Needs to tighten up his route running and improve his vision after the catch. Most players in the state cannot change direction like Meyers, and that sort of dynamic quickness can be harness for big plays on just quick little screen passes.