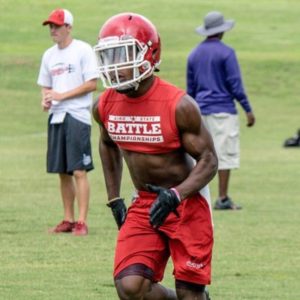 Can play anything on the field. Mainly DB and WR. I am a versatile DB because i can play corner, safety and some nickleback.

Watched film of Wright several times before this evaluation, he’s been a nice two way player for Loganville the last few years. As a junior he was mostly a nickleback, but senior year he got a lot of reps at FS. He hows a nice vertical leap playing the ball up top. Wright has always been a solid athlete, not the biggest guy tho. At the next level he seems better suited at CB or NB – not safety. He’s a solid tackler out in space and he plays with good leverage getting off blocks. I like the pursuit angles he takes and you see him finish off tackles against FBS caliber RB’s. He’s a decent route runner too, and pretty deceptive with his routes, so it was good to see him also have an impact on offense too. Wright is just a solid all-around football player, he’s not going to blow you away physical but makes game winning plays willing to put his body on the line. Wright had a fantastic senior year.