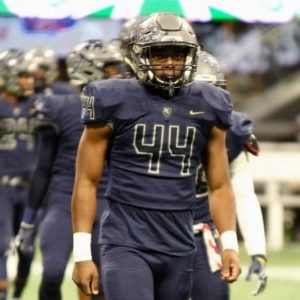 Youngblood was the heart of the ELCA defense last year using his high football IQ, strength and quickness in the tackle box to make a major impact. The 2019 recruit is smart as can be, and does a great job of digesting the play and quickly attacking. His effect on the pass and run game is something else. He has an elite ability to read the play, and last year he must have had over 5 interceptions, a few were just flat out elite football plays too. In several cases he dropped back in a zone over the middle, read the QB eyes rolling out and picked off the pass to the slot on the 10-15 yard out. Have to like the ferocity he plays with his hands to get off blocks. Great body composition too. Youngblood is a D1 football player IMO, his first step in the direction of the play is a natural ability. Lack of height is one downfall, but think he can compete for a G5 team no doubt.