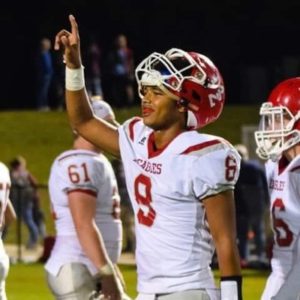 I love the grind, my vision is above average and reaction time.

Hindsman has good length, and does a solid job of getting leverage on his opponent. He’s also a hoops player, showing good lateral quickness. ON offense he played a little bit of QB and RB, but with Iaan Cousin graduated, the 2020 recruit should be their full time option QB. Hindsman has solid running instincts on offense and a pretty smoother operator, but can certainly get more dynamic in his cuts. Overall he shows some versatility. Even down field making passes down the middle, but doesn’t really attack the pass. Hindsman is a solid recruit, he has a solid athletic frame with some legit versatility. Seeing how he does in an expanded role this fall should be interesting. Mt Zion weight lifting is always good, so Hindsman weighing over 180 is promising. I would be interested to see him on the defensive side of the ball more. His early film he makes a few nice tackles out in the flat, but would like to see more production. Not sure if he has the offensive background right now to warrant an FCS offer, but definitely that type of athlete.