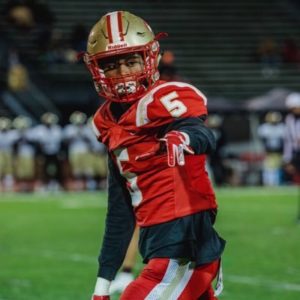 Wise is someone the Rome coaching staff is really high on. As a sophomore he was named Region Triple Jump champion, so that really says a lot about his athleticism. I remember his play against Rome in the back corner of the endzone where he mossed the DB, and also the slant pass he housed for 50 yards. That game definitely caught our attention, but with no film being available until after the season, he sort of fell off the radar. Wise did make a nice impression in that game against the future state champs, a few of those touchdowns were the only thing really keeping them in the game. He shows the long springy first step you look for out his release. What I’m even more surprised by was his hands and coordination keeping his feet in bounds – that’s by far his best skill, and that type of body control makes him a legit redzone target. Maybe it’s the lack of offers, but Wise seems to be one of the better receivers not many are talking about. He’s explosive coming out his breaks, which helps sell these screen passes, but would like to see better elusiveness after the catch. Tons of film of Wise blocking, that definitely leaves a good impression. Overall a very impressive athlete, one of the best for receivers here in the state, and someone that could really blossom at the college level.