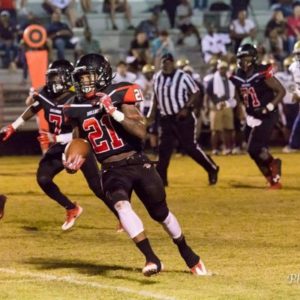 Daniels is a quick-accelerator with a fluid running motion. The senior has really quick hips and that allows him to shake defenders once he gets out in space without losing much speed. For the most part, the 2017 running back keeps it north-south, and just tries to use his excellent speed to outrun the defense. He looks like a relatively tough runner who keeps his pad level low and his feet moving. Gaining weight might be the biggest concern among colleges due to his smaller frame, but Daniels should edge close to 200 pounds in the coming years. His ability to make explosive plays and consistent hands make him a dangerous threat on third downs, especially in the screen game, where he is implemented consistently at Macon Co. Daniels can also play cornerback and wide receiver at the next level as well.