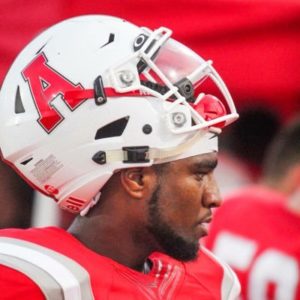 Alexander is now at Archer, after playing at SW DeKalb the last few years. He’s a very fluid athlete, does a nice job of selling his routes and changing direction on a dime. Alexander does a nice job of squaring up on the defender and letting his quick feet go to work. He is very effective as a slot receiver, shows a nice ability to read blocks on bubble screens. Alexander sticks with his routes, and runs them all the way through. Against some tough competition he took some big hits going down the middle and making a catch. In years past, we have always thought of Alexander more as a cornerback prospect. He is very quick, and his natural ability to break on the ball; it just seems like he would find the most success on that side of the ball. Over at Archer it’ll be interesting to see how they fit him onto the squad, but we expect him to have a really good senior year. During his first game he played really well against Milton, made a few impact tackles coming up in run support.