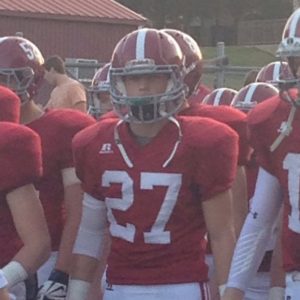 Just from looking at Fortner’s measurements and he has done a lot to make himself the most athletic possible. He had the game of his life against Langston Hughes, where he matched up with FBS cornerbacks on every rep and displayed excellent hands and quick feet on his routes. Same can be said for the game he had on defense too, where he made a lot of plays at NB. His power clean at 300 pounds despite being only weighing 170 lbs is remarkable. He is also a defensive back, and he makes a ton of heads up plays for his squad. He just has a knack at making plays, maybe it’s hustle, football IQ or a little bit of both but the senior just finds a way to get the ball for his team. He’s very disciplined and doesn’t make too many missteps for his squad. His secure tackling is one reason why he typically plays close to the line of scrimmage but against more athletic teams he is at FS/CB. Straight line speed is not good, but he is really quick and can change direction on a dime. He would make a good slot back, considering his quickness and physicality out on the perimeter as a blocker.