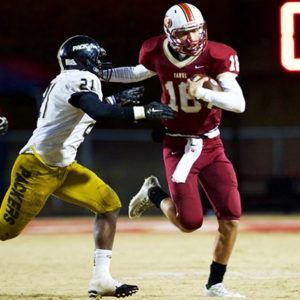 Turley led Mill Creek to the state semifinals losing to eventual champions Colquitt Co. Turley has good pocket presence and steps into his throws, delivering an accurate pass. He carries out his fakes well, and throws a nice ball on the run. Turley reads a zone defense quickly finding the open man. He has a nice touch dropping passes from intermediate distance. The 2017 QB is a savvy decision maker and has size to play at the FBS level. Mill Creek returns most of their offensive weapons from last season and we expect the passing attack to take a step forward with Turley at the helm.