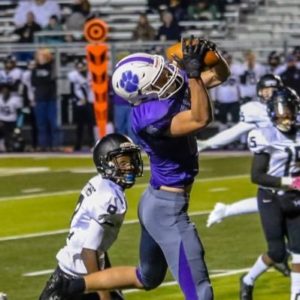 Jenkins made our Preseason All-State HM team. He’s 6’3″ and has some legit upside at the next level. He moves well, explodes out of his release and shows some good leaping ability down the middle. Of all of the athletes on the gilmer squad, Jenkins has the most D1 potential. He’s a pretty physical player after the catch, opting to run over the DB instead of making them miss. We like the toughness, but think he can do more getting around the defenders and try to stride out. Jenkins is an impressive all-around athlete, and looks pretty good playing out on the edge on defense too. He is fast, accelerates quickly to the ball. Really like his activity on defense. Shows good hands as a receiver, making a few tough diving catches on comebacks. Would like to see him continue to develop on the defensive side of the football – that could very well be where his ceiling is at even though he is a good receiver too. Jenkins needs to continue to improve in defensive coverage. Overall, we really like Jenkins and think he should easily get over 200 lbs. at the next level and either be a good possession receiver or play a SS/OLB hybrid type of role in a nickle based defense.