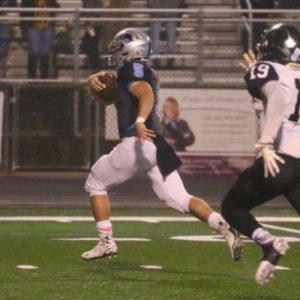 Hoti was the primary back in stay of a senior who was injured, and he earned all-county in his absence showing very good conditioning and effort – played on both side of the football at linebacker too. I’d say, he would make for a pretty good half back/B-back at the next level. He doesn’t explode, but what I like about Hoti is the decisive cuts he makes right at the LOS. Needs to work on his lateral quickness though. Has some good deception to his running, does a good job of faking with his shoulders. Broke a few runs last year that caught me by surprise honestly. Working on his pad level right when he gets the football, needs to be even lower so he is always falling forward for positive yardage. Hoti is a solid FB at the next level. He’s a good blocker and is someone who will do what it takes for his team. I would like to see him get some extra reps at linebacker honestly. Really like his lower body strength and the leg drive he shows going through defenders.