Roaming the middle for Veterans High School’s defense is hard-hitting linebacker Josh Lee. The 6’3″ rising senior was our most recent Play of the Day winner at Recruit Georgia.

To win the fan vote, Lee read the quarterback’s eyes perfectly, then quickly ran over and delivered a punishing hit, separating the ball from the receiver. Lee’s entire highlight reel is chalked-full of plays like the one described above, and demonstrates his innate ability to read a play.

Recruit Georgia got a chance to hear from Lee about his recruitment and how his offseason is going thus far. 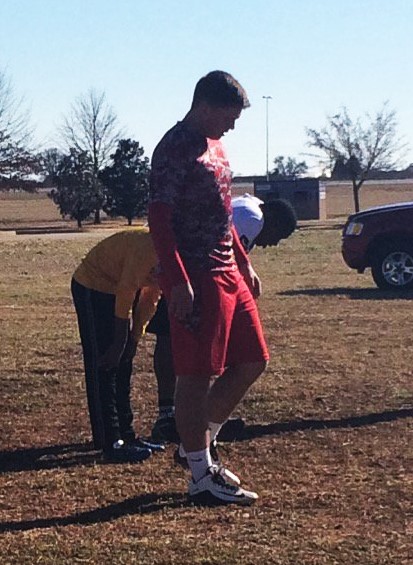 “I’m going to Florida’s junior day next Saturday and The Opening (Nike) Sunday. I plan on attending several camps this summer but will pick based on interest in me after this spring.”

Lee’s recruitment hasn’t taken off but a few schools have made contact. “(I) was recently contacted by Georgia Southern. My coach has been contacted by Samford and they got my game film and transcripts. Georgia Tech said they were stopping by this spring to see me and several Ivy League schools showing interest.”

The class of 17 athlete believes he can help out colleges in more than one way.  “I think I have two (strengths) that make me successful and they are my instincts and I’m a big hitter.” Lee said

Lee has a passion for playing in the middle of the defense. “My favorite position is definitely middle linebacker. I love the freedom to run sideline to sideline making plays.” He continued, “I like filling the hole and letting the back know early that it’s my line of scrimmage not his.”

The Veteran’s star models his game after All Pro linebacker Luke Keuchly, ” I model my game after Luke Kuechly because he can play strong at the line of scrimmage but athletic enough to cover and tackle in the open field.”

His ability to react to the play and make the right read is impressive, but he believes that he can improve his leadership skills.“I tend to lead by actions but I need to work on being more vocal during games. I get my team hyped with big hits but don’t talk much. I will need to rally the younger players this year and be a coach on the field.”

Building a legacy and sharing his game experience with younger players is important to the rising senior. “I want to be the leader of my defense on and off the field. Push the younger players coming up and work hard in the weight room this summer. Win the region and make a deep playoff run.”

The summer camp circuit could be where Lee lands a lot of his offers, so stay tuned to Recruit Georgia for his latest updates. If you are interested in recruiting Lee, click his profile HERE for more information.