Clinching the vote late Monday night for Week 2’s top play was Southwest Dekalb senior safety Mitchell Edwards. Edwards received tremendous support from the Southwest community, providing him with over 10,000 votes in the course of 24 hours.

The class of ’17 recruit’s play was truly remarkable, and was a pivotal moment in the game when perennial power Cedar Grove was threatening to score. Playing back at his safety position on the goal line, Edwards pulled off a miraculous over the shoulder interception, taking the ball away from multiple would-be receivers, and shifting the momentum back into their favor. SW DeKalb ended upsetting Cedar Grove (a team that won 36-0 just one year ago) by a score of 21-20 and his interception played a major role.

Playing his last year of HS football, Edwards spoke about his goals for this year both personally and for his team. “My goals for the season is to lead Dekalb county in interceptions and help my team go all the way to state for my late coach Tanks.” 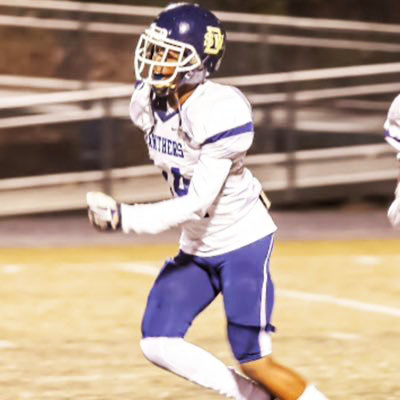 Beating Cedar Grove, who at the time was the #2 team in Class AAA, is an instrumental moment to build off and to continue their early season success. “Defeating a talented team such as Cedar Grove really gave us the confidence and we really needed to win for our coach,” Edwards said.

The Panthers had a very successful offseason competing at various 7v7’s and instructional camps to improve their game. As a senior, Mitchell Edwards set the tone.

“I’ve been going to a lot of camps, workout out at Chapel Hill middle school, and have been grinding really hard at practice so when it’s game time, I will show out.”

That dedication to his craft has caught the attention of college coaches. While he is currently holding offers from just Stetson and Earlham College, Edwards is hearing from many others. “I’ve heard from FIU, Samford, Harvard, Holy Cross, ECU and Alabama St – just to name a few schools.”

College football is kicking off tomorrow and the senior plans to visit multiple colleges in the coming weeks in hopes to garner more attention. “I only have those two offers, but I’m planning a series of unofficial visits beginning in early September,” Edwards confirmed.

Making clutch plays like he did this past weekend will certainly continue to peak coaches interest. We have evaluated the senior now for close to 10 months, and have been very impressed with his progress. He is a ball hawk out there on the field and his ability to anticipate the play gives him an advantage over the competition. The senior models his game after two players, he spoke a little about each, and how he incorporates their skills into his game.

“I model myself after Eric Berry and Karl Joseph. Both are excellent backs, both my height. Eric Berry’s eye sight and range on the field along with Karl Joseph’s hard hitting and go get the ball attitude really makes it hard for me to pick which one I like the best.”

Edwards will need to play like Barry and Joseph if he wants his Panther’s to continue their breakout 2-0 start to the season. They have Creekside and Stephenson High Schools coming up the next two Fridays – each with escalating importance if they win. The Panthers are on a mission though, and Edwards and his teammates are determined to win for their late coach Michael Tanks.