Machari Bighams played defensive back and wideout this past fall for the defending Class A-Public state champion Clinch County. Unfortunately, the Panthers did not make it back to the state title game, finishing 11-2 on the season season after losing to McIntosh County Academy in the state semifinals this past weekend. 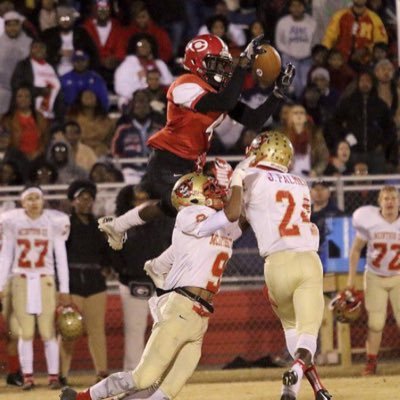 The senior finished his career with the Panthers as a true winner out there on the field. Bighams made plays all across the field this season, making over 30 tackles while also being a ball hawk in the secondary. He finished this season with six interceptions, including one in the final game of his career. On the offensive side of the ball, he had two explosive catches for 95 yards on the season for the pass-shy Panthers of Homerville.

The 5’9″, 165-pounder made plenty of plays on the gridiron this season for Clinch but is also a ballplayer on the basketball court for the Panthers, playing both guard positions. His athleticism shines in both sports and is a key reason why he is a standout in both sports at Clinch.

I spoke to Machari and asked him what he wanted out of his future, and he stated, “I would like to play college football, and while attending college, I want to study sports medicine with hopes of becoming a personal trainer.”

Machari has been contacted by LaGrange College, College of the Canyons and Cincinnati Christian—all are expressing interest in the talented playmaker. He boasts a 2.9 GPA and is working hard to finish off his final year. If you are interested in recruiting Bighams, click HERE to visit his HUDL page. Also, we have provided a quick Twitter video down below of him making a momentum-changing tackle, forced fumble and fumble recovery all in one play in the quarterfinals a few weeks back.