Isaac Foster is our most recent Play of the Day winner. The super-elusive rising senior from Chattooga made a miraculous scramble at his quarterback position last season against North Murray.

The slippery QB circled around the pocket, knifing through the defensive line, before breaking free. Foster then showed off some fancy footwork breaking the ankles of two defenders for an impressive 20-yard run. 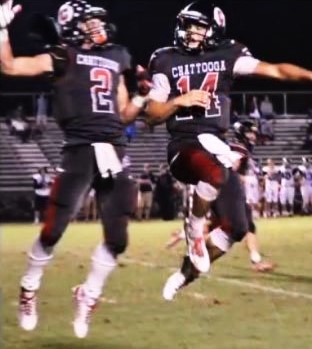 We spoke with Foster about his recruitment and goals for this upcoming season. “My personal goal for next season is to pass for 1,000 yards and also rush for 1,000 yards.”

Foster then spoke about team goals. “My goal for my team is to become region champs, and go deep into the state playoffs.”

To make these goals a reality will take a lot of hard work during the offseason. “What I need to improve on the most is relaxing in the pocket and letting it fly.” Foster continued, “I also need to improve on my medium depth passes.”

Foster could play multiple positions at the next level but spoke about his favorite position. “My favorite position to play is quarterback. I love being in charge of the game, and leading my teammates!”

The Class of 2017 dual-threat quarterback believes his biggest strengths on the gridiron are his awareness and elusiveness. “I have a very quick first step,” Foster explained.

He tailors his game after a Super Bowl-winning QB. “I model my game after Russell Wilson. I love the way he plays the game of football.”

Currently Foster has no offer but is hearing from Georgia Tech, The Citadel, Wofford and Furman. He attended Furman’s junior day last month and expects to visit several camps.

“A couple (camps) at Georgia Tech. Also, I plan on making it to Samford’s camp, and a few combines as well.”