Macon County’s record-breaking QB K’Hari “Red Rifle” Lane committed to Arizona today according to Marvin James from WMAZ. Lane was a much talked about recruit the final weeks leading up to National Signing Day, Bleacher Report did a massive article talking about the unheralded recruit, but come February 1st, Lane still had not signed with a college. 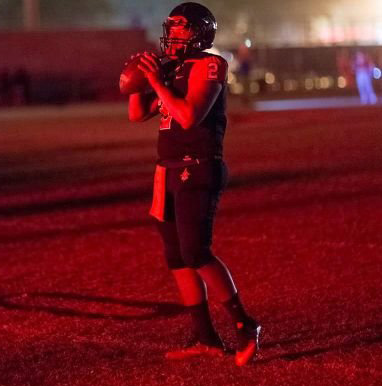 To our knowledge, his lone offer at the time was from Grambling State, so Lane decided to be patient and continue to let his recruitment play out. Over the last few years we have seen sleeper QB commit to Power 5 colleges, former Jefferson QB Evan Shirreffs now at Miami comes to mind,  but few had the accolades like Lane.

Lane took a visit to Arizona this past weekend where he was able to tour the facilities and meet the coaching staff.  All of this culminated into an offer for the prolific passing QB, one that he jumped on, committing soon after his visit.

The Class A Public Offensive Player of the Year was a state record-breaker this year throwing for 56 touchdowns, while also leading his Macon County team to a blowout win in the state title game over McIntosh County Academy. At Arizona, expect Lane to be extremely comfortable in the wide open Pac 12 style of football, where his elite patience, timing and execution of the spread offense will be on display.

The 2017 recruit is a pocket passer in the truest sense, and has a knack at reading mismatches, then throwing a perfectly placed pass for his receiver to go up and make a play. Regional colleges doubted Lane’s ability to play QB at the next level, so expect the hardworking student-athlete to get on Arizona’s campus with a purpose, and continue to prove the doubters wrong making big plays for the Wildcats.