Dawson Covington is a defensive end/tight end at St. Simon’s Frederica Academy, and the GISA star is looking forward to his senior year. Recruit Georgia caught up with Covington over Twitter. 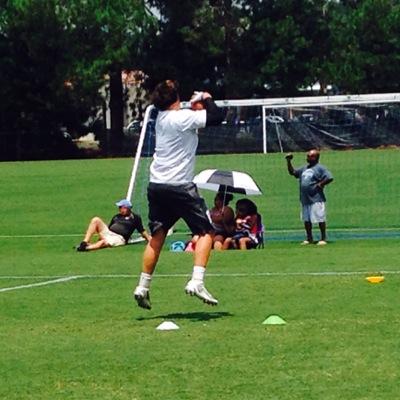 Covington snags a ball at an offseason camp

“Agility and footwork has also been a main focus this offseason,” Covington said.

In the strength department, Covington said he is now maxing out his bench press at 310 pounds, his squat at 485 and his deadlift at 455.

On the field, Covington has participated in 7-on-7 tournaments with his team throughout the break. “I have been able to work on my route running and receiving,” he said.

Though the two-way player projects as a starting defensive end for the Knights, he has also been working some at strong-side linebacker.

Covington currently has interest from Georgia Southern, Kennesaw State, Lamar, Samford and Central Methodist, and he is “currently working on fall visits.”

“I believe there is always room to improve in all aspects of the game and will continue striving to do so,” Covington said.

As for his senior season? Covington told us he is looking for a state championship for the Knights, who play AAA independent football, the highest classification in the state.

“Another goal for this fall is to create a brotherhood and legacy that will last forever.”