Dylan Cole committed to UT-Chattanooga on June 20. The powerful-blocking offensive lineman from Dalton chose the Mocs over offers from Morgan State, Tusculum and Stetson to go along with tons of local interest from FBS and FCS colleges.

The 2018 student-athlete earned an offer from UT-Chattanooga just a day after the Mercer Super Elite Camp on June 3. Over the next several weeks, Cole visited Furman, Samford, The Citadel and Georgia Tech, but it was his most recent college visit on June 15 to UTC that ended up being the decisive factor in his recruitment. 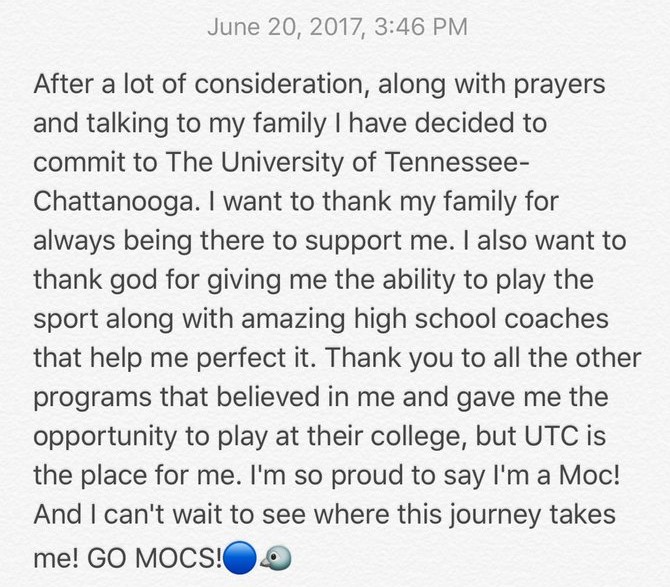 On that visit, Cole got to meet the UTC coaching staff and got to bond with his future position coach Nick Hennessey. His relationship with the coaching staff to go along with the outstanding location of Chattanooga was just too much, and on June 20, Cole announced his decision to become a Moc.

UTC is landing one of the more athletically gifted offensive lineman in the state who is just beginning to scratch the surface in the weight room. This offseason, he has gained about 15-20 pounds and currently holds the highest vertical jump out of any offensive lineman in our database with an eye-popping 35.5″.

He was a second-team All-State lineman and was a major leader for his Dalton squad that made it to the state semifinals. Cole played his best football in the playoffs, where he looked particularly good against Coffee and Valdosta.

We believe the Dalton lineman is a major sleeper in the class and that UTC got a major steal in his commitment. Expect him to be on several preseason All-State teams this upcoming year and for his Dalton squad to make another deep push into the playoffs.

He is the first commit for the Mocs in the Class of 2018. We expect them to land a few more in this recruiting cycle as their coaching staff has made a concerted effort to recruit our state, so stay tuned to @RecruitGeorgia on Twitter to hear the latest recruiting news.