Ashton Barnes, Lanier’s elusive running back capable of shaking the elastic out of your socks, pledged his commitment to the Air Force Academy yesterday. 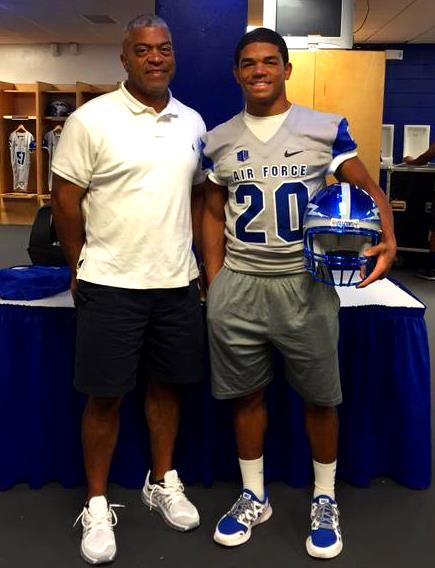 He announced via Twitter, “At this time, I’d like to announce that I will be furthering my education at the United States Air Force Academy! #GoFalcons.”

The talented back had offers from +12 schools, including Georgia State, Army, and most of the Ivy League.

His decision comes with little surprise following a trip to Colorado Springs that Barnes characterized as an “immaculate visit” on August 22nd.

A smart decision too by Barnes.  The senior running back is outstanding at making players miss in open space, making him a perfect fit for Air Force’s spread option attack. Barnes is also a true student-athlete with over a 3.9 GPA and the education at the Academy was just too good to pass up.

Lanier’s (2-1) season has been up and down so far, but aim for a win-streak after last Friday night’s win over Clarke Central. Barnes had 75 yards on 13 touches but also had an 88-yard kickoff return called back.

Barnes is a big play waiting to happen, and figures to be an important part of the Longhorns offensive success this season. Totaling over 1000 yards last season, expect the senior back to tally even more this fall.

Blessed to announce that I have committed to play football at the United States Air Force Academy! ????⚫️⚪️ #GoFalcons pic.twitter.com/wvKakb4RP7