Our staff is already combing through film from the scrimmages and one player that caught our eye is Southwest DaKalb’s Javeon Cody. The senior athlete is our most recent winner of our exciting Play of the Day feature. Cody’s winning play showed off his speed on a tunnel screen where he made a nice cut back up the sideline, leaving the defenders in the dust. 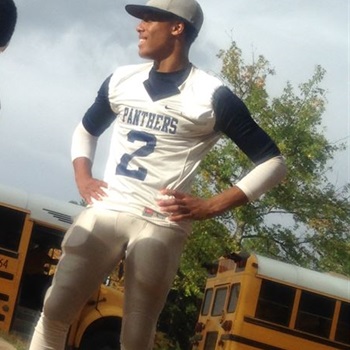 The SW DeKalb senior doesn’t just play wide receiver, he also is a menace on the defensive side of the ball, playing a hybrid defensive end/linebacker position. Out on the edge of the line of scrimmage, he makes an impact, and is terribly hard to block in 1 v 1 situations.

Cody is a multi-sport star, and was recognized by Perfect Game as an underclassman honorable mention All-American on the baseball diamond. In our experience at scouting, baseball players, specifically outfielders like Cody, make for great wide receivers at the next level. Their ability to gauge the flight of the pass more times than not is superior to players who never played the sport.

Here at Recruit Georgia we think Cody is best suited at the next level on the offensive side of the ball at wide receiver. At 6’3″, 205-pounds, Cody has a similar body type to Terrell Owens, a player he models his game after. He has yet to hear from any colleges to this point, but if he puts up more performances like this one, he should be receiving numerous inquiries about his talents.

Cody said his goal for this season is “for me and my team to go all the way.” If you are interested in recruiting Javeon Cody click HERE for his RG profile.