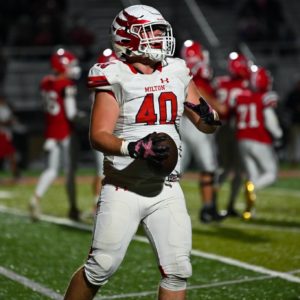 Tumminia has been a multi-sport athlete who has stood out as a wrestler, but has taken to football more in the last year and really gained a ton of weight since last fall. Seriously, the 2021 defensive linemen is now up to 262 after weighing around 230 just 6 months ago. The defensive tackle prospect is pretty quick getting off his blocks, and does a nice job of controlling the middle of the field. He is surprisingly quick moving laterally and definitely like how well he shades in the direction of the play – one reason why he had multiple fumble recoveries last year. Tumminia mixes it up, and has shown good progress over the last year in the weight department to be encouraged by his overall body of work. He is strong as an ox too, but would like to see him continue to work on playing with leverage. Tumminia should be around 290 at the next level. He’s not too far away from benching over 400 lbs. He plays with a good bit of hustle and was disruptive getting into the backfield creating a lot of hurries. Tumminia is very interested in becoming a pilot and made a point to mention his willingness to serve the country. Being another 20-30 lbs. could make a considerable difference with his film, so should definitely keep an eye on his film this fall.