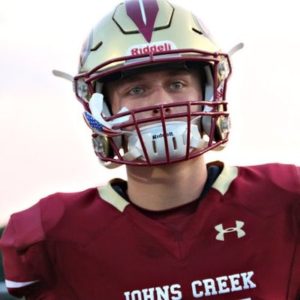 I am a competitor and I get the job done.

Gibson has been a starter for most of high school, and the big heavy-set quarterback has really honed his skills. His mobility in the pocket, specifically the footwork and presence he shows is FBS caliber. He can make elite throws from all angles. Decision making is absolutely getting quicker, and release is quicker too. Gibson sees the field well, and anticipates when his receiver will break free against a zone defense. He throws a nice tight spiral. Sometimes he tries to do too much and it leads to bad passes that result in INT’s. From a raw gun-slinger standpoint Gibson lets the ball go. Lateral quickness needs to make an improvement, and would like to see increased velocity of his passes. The 2019 recruit lost some talented receivers last year, so let’s see how he adapts to losing FBS caliber playmakers.