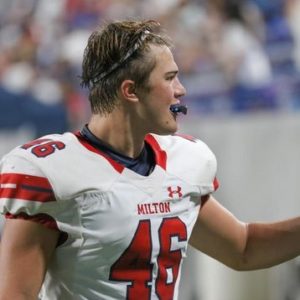 Barnett was one of the main rushers for Milton this year, and his energy and impact on the field was felt in all 15 games to their state title. He is very strong at the point of attack, and you see him split double teams being too quick and strong. He is fearless though too, and no matter who he is lined up against Barnett is looking to dominate them. He has film against top rated OL where he gives them a really tough time. Barnett’s motor is great, but he is also very well schooled. I think he can get to be around 250 at the next level. Getting quicker out of his stance will help. Extremely smart football player, though, really like to see guys break off a rush to defend a screen pass, just shows they have their head in the game and watch a lot of film.