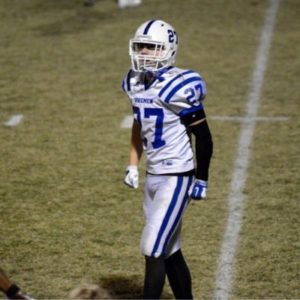 I am a leader on and off the field. I have a high GPA and an equal athletic ability. I am a power lifting state champion, Defensive Player of the year Junior year, First Team All Region Sophomore year, and Honorable Mention my Junior year.

Really like this kid’s game, he reacts to the play extremely quick and is a natural athlete the way he accelerates towards the football. His hip rotation he shows while running is really impressive for a linebacker, and sure enough his shuttle time stands well to his film. I’m impressed with the way this young man can fill a hole, he is a powerful football player and we see him take down some pretty talented athletes. He can really pack a punch with a tackle – a skill that is not taught so much. Sweatt is a really nice recruit, his agility numbers should really attract a wide variety of schools. His film doesn’t show him doing much in the passing game, that’s where he will need to test well this summer/fall but I think he can be a steal for an FCS school at WILL. Would like to see his lower body strength improve, which should help with him driving his leg through the tackle.