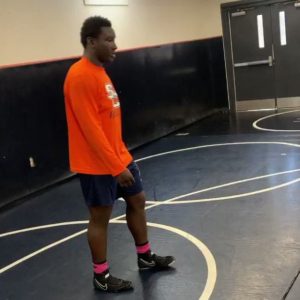 Riley stands out right away on film. He gets out his stance quicker than everyone else on the DL, and has pretty physical hands at the point of attack. Riley has strong hands at the point of attack and generally speaking he shows good hip bend and body control while engaged with an opponent. He has a solid frame at 6’1″-6’2″ and should be closer to 260+ at the college level. He’s got some tweener status, but definitely like his motor. Another interesting thing about Riley is that he was one of the best punters in his classifications with a good average and dropping a good chunk inside the 20. He’s a good wrestler, and general speaking just a good athlete – even seeing the big man do a back flip. He’s a good fit as a 3-4 DE in my opinion, but would mind seeing some of this punting film either.