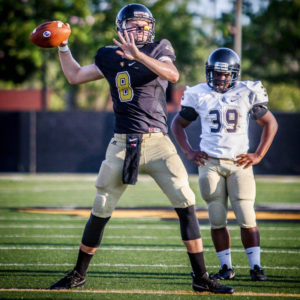 Krajewski sat out his junior season becoming familiar with the Colquitt playbook this year he has his team flying high into the state semifinals. Propst brought him along slowly this year, and there were some doubters, but he has unleashed him towards the end of the season like I was expecting in fact, basically lulling the state asleep for most the season with clock controlling run plays. Now the playoffs are going he’s throwing for nearly 300 yards each season, and looking like the P5 caliber QB that I have always thought he could be. The class of 18 QB has solid fundamentals and a nice high release point, needs a little cleaning up with his arm slot, but his 6’4″ frame gives him excellent throwing windows. He has a nice touch on passes thrown out to the sideline and has solid pocket presence when avoiding the pass rush. Krajewski also shows some decent running vision and athleticism in open field. He is fairly accurate when throwing on the run and we are especially impressed with the heat he gets on his passes when throwing across his body. Krajewski is a player we have been adamant about, even ranking Colquitt preseason #1 in the state of Georgia primarily due to what he brings to the table.