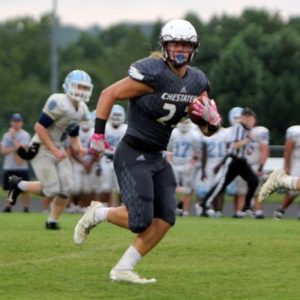 I love to hit, work with my teammates, and want to do anything I can to help my team!

James is a really big athlete who can play a lot of positions. He loves to hit and shows an elite burst coming off the edge. He is a major weapon in the passing game and he shows really good vision with the ball in his hands down field – he even makes some really nice cuts against the grain. James’ athleticism is really impressive and after watching him against some tough GA competition we think he should collect some local Div 1 offers this upcoming season. His potential as a pass-rusher should not be down played, and that seems like an area where he has a ton of upside. Senior year he has really increased his level of play, making impact plays on both sides of the ball, and looks like an FBS caliber athlete no doubt.