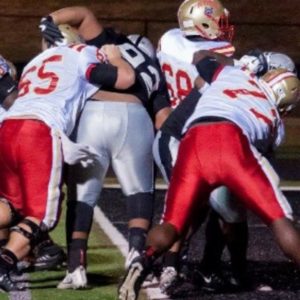 I’m a hard worker, and I love to play football.

Watched Leslie’s film during the offseason, especially his spring film and he came away as a big powerful offensive guard prospect who can play at the FBS level. He’s good enough athletically speaking at least. Nice hip bend, pretty light feet and the explosiveness at the point of attack. Run-heavy teams should definitely go after Leslie, and I really like the improvements he made over the last year. Leslie does a great job of keeping a flat back while blocking. He is very quick getting out his stance. Plays with violent hands, knocks the defender down like crazy.