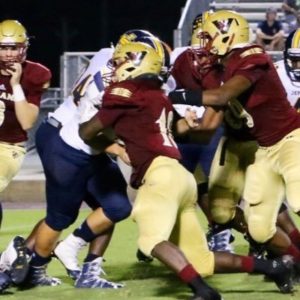 Finished the season with 106 tackles, 1st team all region linebacker, defensive player of the year

The speedy linebacker finished the year with 100 tackles for his very competitive Class AA team. He has a lot of tackles where he uses his speed and pursues the ball carrier from backside catching him way before most linebackers would. That sort of acceleration will certainly help Bell at the next level. His frame suggest that adding weight might always be an issue, cannot see him getting too higher than 220 pounds. Bell is a good athlete, he can play WILL at the next level. Smaller schools do not run as much spread stuff, but his speed is showcased on some plays where he gets out to the flat with great speed. Tackling appears to be good, he doesn’t have great strength, but overcomes with good technique and getting lower than his opponent. Bell shows really good agility for a linebacker, it allows him to get around blocks and square up on this tackle much better than other’s in his class.