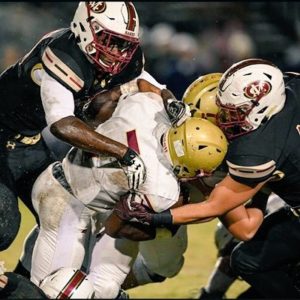 Myles Jackson showed some quality potential during certain points in the 2018 season. He’s a pretty well put together athlete already weighs around 235 heading into the summer of his senior year. What I like about the 2020 recruit is versatility to play OLB and DE at the next level. He is built like a brick house, and only getting more explosive. His 37.6 vertical jump is very impressive, and shows the weight he has added over the last year, and has made him even more explosive. He was a bit of a tweener for a little, but how quickly he has added weight to his frame, it’s hard not to see more FBS schools going after Jackson, he has legit P5 potential as a pass-rusher with his explosiveness.