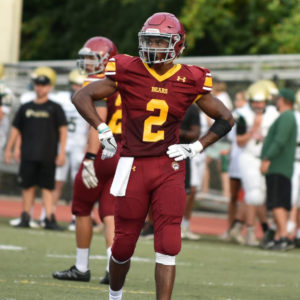 Has a student first mentality and on the field has great body control and hands.

Tubbs had a great comeback last season to the point that teams were double teaming the WR he was so unstoppable. The 2018 recruit has the body type and strength to become a dominating athlete at the next level, but never really developed the top end speed. Tubbs has elite hands and focus going up for the ball, while also using his body to box the defender away from the pass. Power 5 schools have shown a lot of interest, especially Vandy and Georgia Tech, but after camping and visiting multiple times it seems like that boat has sailed. Senior year he’s playing both safety and wide receiver again like when he was a freshman on varsity. Going way back, but we were always impressed with his ability as a safety more than at receiver. He made a play this year against ELCA where he ran 70 yards down field and caused a fumble from behind and recovered it. His ball skills at the free safety position would be a major advantage and he can become a turnover machine.