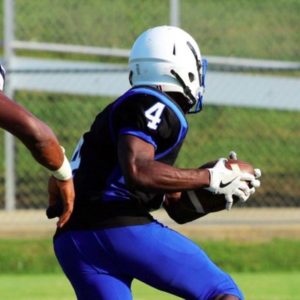 I have the tools to be successful in the classroom and on the field. Always working hard looking for ways to get better.

Mathison can make cuts on a dime and is very dangerous to break a few ankles out in space. Newton utilizes his playmaking ability in a number formations sets. Mathison has running back-like instincts when in the open field and very good balance when absorbing contact. For that very reason the junior is used on various screen plays and jet sweeps. Mathison flourished his junior season becoming an even bigger part of the offense and lining up at multiple wide receiver positions in the process. Route running certainly improved and he turned some cornerbacks completely around on deep comebacks. He increased his vertical over the last year from 33″ to 40″, so really interested to see what kind of progress he makes in this next offseason. The 2019 recruit is one of the more elusive players in 2019, and that short space agility with his continued progress as a route runner will make him a coveted slot receiver during this offseason.