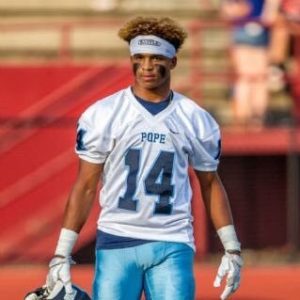 The 2019 recruit can certainly fly. He shows track like speed in his initial burst and can stride out creating separation. His ability to stretch the field showcases that his speed is legit. The 2019 recruit can find himself a seam and just hit the jets blowing by the defense. His lack of film from junior year is interesting, and potentially an injury occurred (confirmed – hamstring was pulled), because judging by his speed the 2019 recruit should have only progressed from soph to junior year. McAlpine is one of the faster players in this recruiting class that we have evaluated. His speed would be interesting to see at CB for sure.