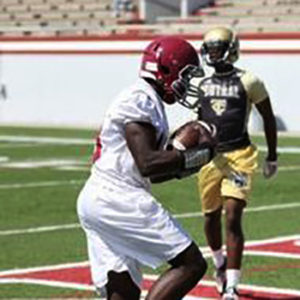 I won't talk much with my mouth. I'll let my shoulder pads do the talking. And I'm willing to do whatever it takes.

Gary is a tough blocker who can physically dominate defensive backs. Lowndes uses him in the spread mostly for blocking on bubble screens. He looks like a good athlete and really grew into his role for Lowndes this season. I’m not really sure if you would consider him a TE/H-back/WR but whatever you want to say he is very fast and the 4.5 speed looks legit. Not many players score long TD’s against Westlake in 2016 and Gary looked really fast with good running instincts once in open field. It’s those occasional explosive plays that really catch out eye on Gary. For the most part he is just a blocker and special teams player, but do not mistake that for lack of production. He a weekly player of the week on special teams.