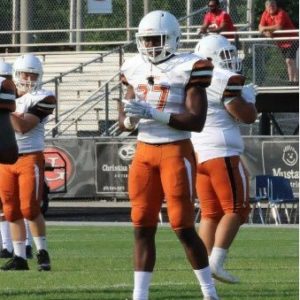 My dad and mom have always influenced me to strive to do my best regardless on the field or in the classroom. I haven’t always been the biggest, or the fastest on my football teams but Im always willing to do what my coach ask me to do to help our team. By playing football, it has helped me build confidence in myself and the hard work is not going unnoticed. I’m bigger and much faster. My academic goals for high school is to finished the last year on the honor roll. In college I want to attend a school that is a good fit for me athletically as well as academically. I believe I not only have the talent to compete for a college team, but the character, and work ethic to make an impact in the program. As a three sport letterman, I know I will be a great fit on your team.

The last few years Johnson has been sitting behind a pair of two FBS football players but this fall is his chance. The senior has started off his season really well, and he looks very effective as an OLB. He’s a very aggressive blitzer and his ability to disrupt the QB’s vision is legit – he runs downhill. Johnson has a background in wrestling, which we always like in LB’s we scout. Considering his excellent size and how well he moves laterally I think Johnson should receive more interest from FCS & FBS schools alike. Looks like he made some improvements to his pass defense as the season progress and he started making more PBU’s as the season went on. Johnson just has a ton of upside, sometimes he hesitates on the play, but given more experience and coaching that should stop his poor angles he sometimes takes.