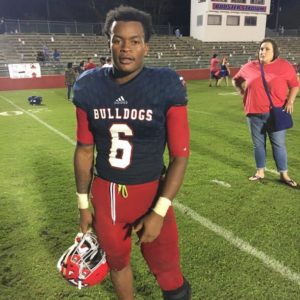 Morgan is one of top backs in the state of Georgia. He is a powerback coming in at 215 pounds. He runs with outstanding balance and determination to get as many yards as possible. Come the 4th quarter Morgan has grinded the D down to exhaustion but he’s still toting the rock like it’s the first snap. The 2018 recruit times his cuts perfectly and uses his excellent vision to set up his blocks excellent to pull off one long run after another. He’s been working on his stiff arm this offseason, which should be a very welcomed bit to his arsenal. Morgan has a power back’s frame and should be considered a legit FBS recruit. He is overcoming an injury, but making his way back, and showing great progress in his early year film. He is so tough, and plays the game with a competitive edge truly think more colleges will offer once they see see him move around. Also, he has really improved his stiff arm and that is a major weapon for him getting off tackles.