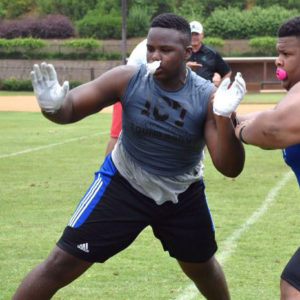 Justin is a senior at Rutland High School in Macon, Ga. (GPA 3.02). Junior film is all we have right now, and we have seen before, but believes it proves our thoughts of how big of a sleeper he is. He does a great job of using his hands, and is very quick off the ball. Weight lifting needs to improve. Justin has been training with Dwight Johnson at Total Athlete Sports Complex for the past 4 years, so that explains why he is so fundamentally strong. He’s not very strong at the point of attack, doesn’t always keep a flat back while engaged. At the next level with the right diet and weight lifting he can be well over 290.