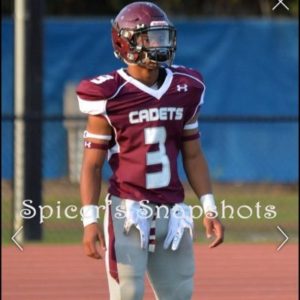 My constant strive to be the best I can possibly be.

Griffin has the natural skills you look for at for a cornerback. He has a smooth back pedal and keeps his hips on a swivel. He reads the quarterback’s eyes, we saw him in the state championship makes a great break on a pass down the middle. Griffin just seems to be around the ball and just a natural athlete. He’s added about 10 lbs to his frame from last year, dropped his shuttle from 4.3 to low 4.0’s. He was injured at the beginning of his senior year but has comeback and played great since then. Griffin is just a straight playmaker, and has the versatility to play multiple defensive back positions.