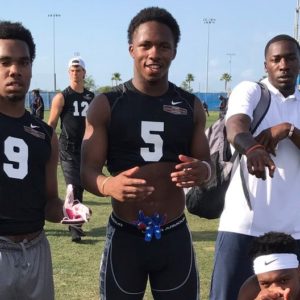 At some point, Smith might just be a better receiver, and after multiple years calling for him to be “the next RB” at Jenkins, he has continued as a receiver. What I really like about Smith is how quickly he picks up yards after the catch. He has elite acceleration getting up field. I think if he can improve his top end speed you could really see him break off some long plays next fall. Smith’s versatility and skill set is similar to Kenyen Drake’s at the next level. He has continued to improve as a route runner, and looks really quick on deep outs and button routes. Option schools should be very interested in Smith’s abilities at the next level and we think he is an FBS talent.