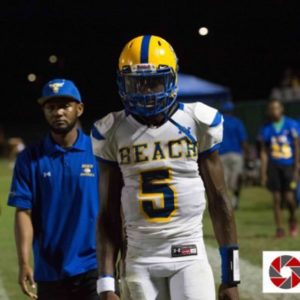 Wells has a solid frame, and a fairly nice touch with the football leading his receiver down field. He’s accurate in the red zone, and locates the pass on the back shoulder. Well can play under center and in the gun. He stands strong in the pocket, at 6’3″ his release point allows him to throw over the defense. He sets his feet quickly when making a pass – pretty solid with his fundamentals. Wells is a solid QB prospect, he doesn’t wow with athleticism, but makes good accurate throws with nice trajectory so his receiver can make the best play on the football. Was even more impressed of Well his senior year. He stepped his game up and had Beach playing some competitive football being an x-factor for his team put up big offensive totals against tough teams in 3-A. Wells is one of the bigger sleepers in this class at QB. He ran the ball a lot more this year and starting to show that dual threat upside with a few long runs that gashed the defense for big gains.