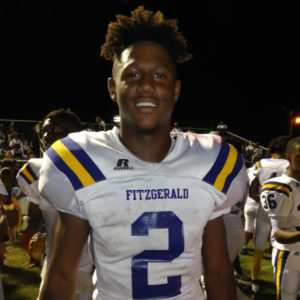 Graham is a Recruit Georgia All-State player at athlete. He has elite speed and can beat almost any angle a defender has on him. The last two season’s he has been a standout in the state championship game but each time his team has come up short. Graham does not use social media, and will get the hype like other recruits, but major college are taking notice none the less and he has become a coveted recruit in Georgia. He is the fastest QB in the state of Georgia no doubt. His senior year the gloves have come off, and he is now throwing the ball at a much higher clip. Early on this season they have lost some very close games, and currently hold a 1-3 record, and they face a near impossible matchup against Tift County this weekend, a team that just entered the top 10 in 7-A. It will be a tough road for Graham and his squad this season no doubt, but if they can hit their stride against Brooks and Thomasville than expect them to make another deep run into the playoffs. Our bet is they get hot late this season, and make the playoffs pushing for another championship run. This will be true especially if Graham can continue build with his receiver and work on checking down. His passing progression will play a major role in his recruitment, and how many schools entertain the idea of him playing QB – his potential is somewhere in between Nick Marshall and Charlie Ward at the college level.